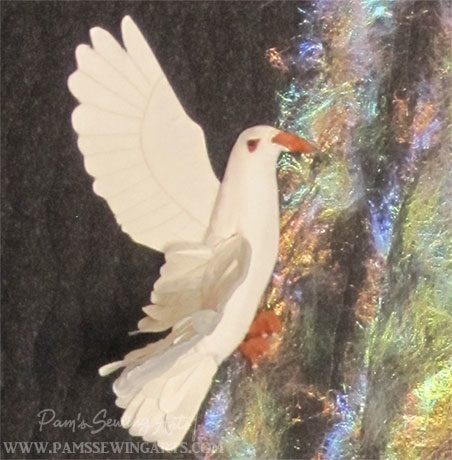 Dove: The Dove is the primary symbol of the Holy Spirit, because the Holy Sprit was present as a dove at the baptism of Christ. In Christian art, the dove is depicted in representations of the Trinity and the Annunciation. In the Old Testament, the dove, with an olive branch in its mouth, became a symbol of the peace God made with humankind in the story of Noah’s of Ark as a harbinger hope. The dove also become a symbol of man making peace with God when it was offered as a sacrifice, as depicted in scenes of the purification of Jesus’ presentation in the Temple. 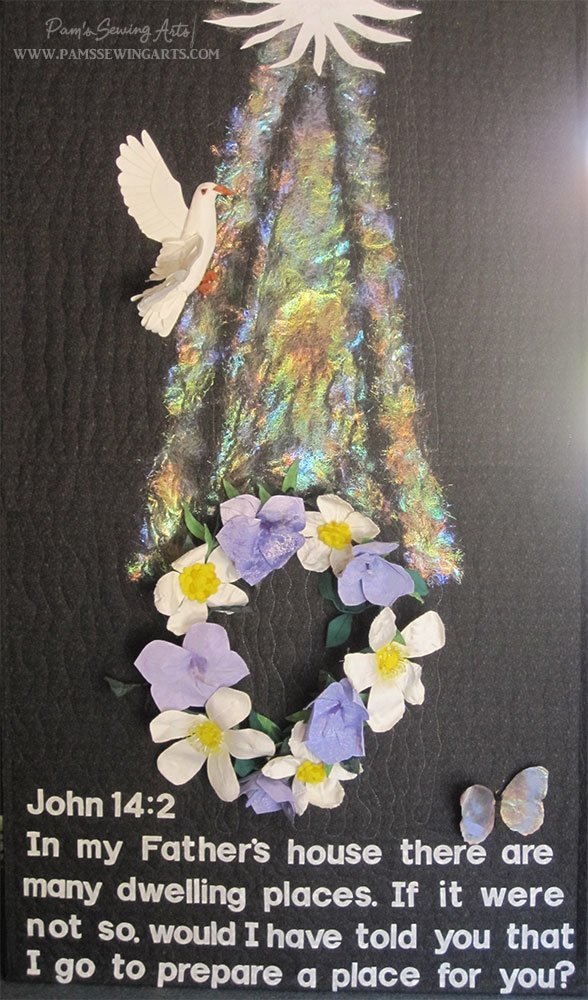 Light: A symbolic use of light is the halo or aura seen around holy beings as a symbol of truth, wisdom and purity of heart. Notice the halo and flaming torch on the Statue of Liberty. Light is not a solid ‘thing’ so it has to be symbolized. A halo is associated with the head and light around other parts of the body is usually called an aura.

In many early paintings, light or the source of light suggests divine presence. In many depictions of the Annunciation, a beam of light enters Mary’s ear as a symbol of God impregnating Mary by his divine Word.

Rose: Early roses had only five petals, and legend says the original color was always white.  The ancient Greeks believed that roses turned red when Venus chased after her lover, Adonis, and pricked her finger on a thorny bush in her haste to reach him.  According to Christian documents, the blood of the crucified Christ spilled down onto a white rosebush growing at the foot of the cross and ever afterwards, rose blossoms were red instead of white. The red rose symbolizes martyrdom, a white rose eternal love, silence, wistfulness, virtue, purity, secrecy, reverence and humility and a wreath of roses symbolizes heavenly joy.

Sun: The Psalmist describes God as “a sun and shield” – the source of favor, honor, and all good things (Ps. 84:11). Later Malachi announces, “This is a prophecy of the salutary effect of Christ’s coming – the triumph of good over evil. Depictions of Christ as the Sun God appear as early as the fourth century in the catacombs of Rome.

Harebell/Campanula: The Harebell is the flower that our society decided to use as its symbol of humility and grief. With the five petals it fit right in with my plans for this banner. See colors below.

Black: Black is a color symbolizing mourning or grief. It is also associated with solemnity, negation, sickness, and death. Black is inherently ominous in that it represents the unknown, a feature it shares with death. In the apocalyptic literature of Scripture, the black horse represents the ravages of hunger.

Blue: The color blue represents many things: heaven, infinity, spiritual love, truth, constancy, and fidelity. Cerulean blue, the color of the sky on a sunny day has natural symbolic connection to heaven.

Purple/Violet: These liturgical colors that represent sorrow and penitence. In Scripture, purple is also an indication of costly quality and frequently associated with royalty and high officials.

White: White usually represents purity and holiness. It is the color for the joyous celebrations of Christmas and Easter.

Five: five is a significant symbolic number relating to the Passion of Christ. It refers to the five wounds Christ suffered at his crucifixion.

Butterfly: the butterfly, a symbol drawn from early mythology, represents resurrection in Christian art. Its life cycle from caterpillar to chrysalis to butterfly symbolizes the life, death, and resurrection of Christ. The Greek language uses one and the same word for the soul and the butterfly: psyche. Most of all it is a symbol of hope.