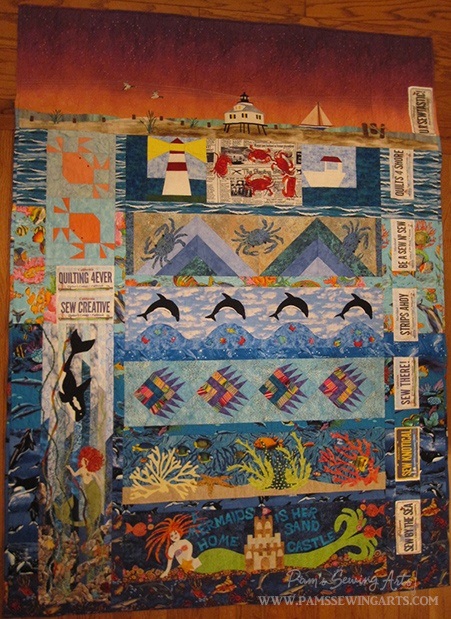 I called this quilt Maryland Quilt because some of these Row by Row pieces came from Maryland and my son and his family live there. I found the Row by Row site in 2015 and wanted to know where the quilt stores are close to my Maryland family.  I have to give you a heads up with this site though they only have listed the store that participate in the program. That is all right with me there is plenty of them for me to visit when I am in all different areas of the United States, Canada and now part of Europe. More stores are joining every year. In the summer of 2015 I went a little crazy and went to approximately 50 stores all over the country and bought the kit so I now have to make most of these fun rows. In 2016 I didn’t make it back to Maryland in the time that the experience was going to Charlotte my sons wife went to the stores and picked up two rows that I needed to fill out their quilt and my daughters quilt. What made it even more fun was that she didn’t know I was making it for the top of her quilt.

I quilted and bound this quilt before I left to go visit my cousin Mary in Pennsylvania 5 days before I would see my family in Maryland. Mary helped me with the finishing touches for this beautiful quilt.

Some of the Rows in this quilt came already laser cut and it saved me a boat load of time. Starting with the top row with the old lighthouse and setting sun background I made it twice as high as the regular rows because I really liked this piece of fabric. I than did something fun with it and used glow in the dark thread for the light in the light house. All of the main pieces were laser cut which again helped with time. This wonderful row came from Lilies of the Field in Easton Maryland the closest store to my family.  This is a 2016 Row that Charlotte picked up for me and I am very happy she didn’t know what I was doing with it.

There is another Lilies of the Field Row the Blue Crabs is from 2015. The blue crabs I hand cut out and the chevrons I had to cut the strips and learn how to use a new triangle ruler for cutting them out. The kit came with little black buttons but I used Mary’s beads that seem to fit for my idea of crab eyes. 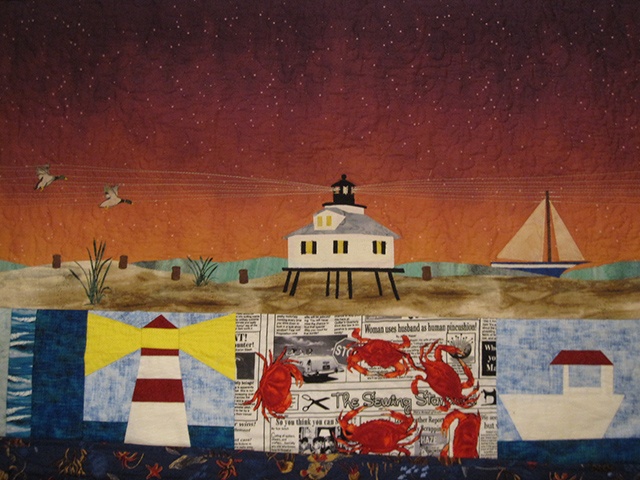 The lighthouse with the yellow for the light is from Peggy’s Sewing Center . The lighthouse and boat are paper pieced and then attached the pieces on the ends. I bought fabric while in Maryland in 2015 with these red crabs on it and decided to use some of the crabs out of it. Using these crabs instead of the pattern for the crabs they provided. The fun newsprint fabric is “paper” with fun quilter’s articles all through it. I bought more for other projects too.

The two pieced crabs on the left side under the top row are from a California store in Fallbrook. Quilter’s Cottage  and they had these fun license plates so I bought both of them to add to the quilt. 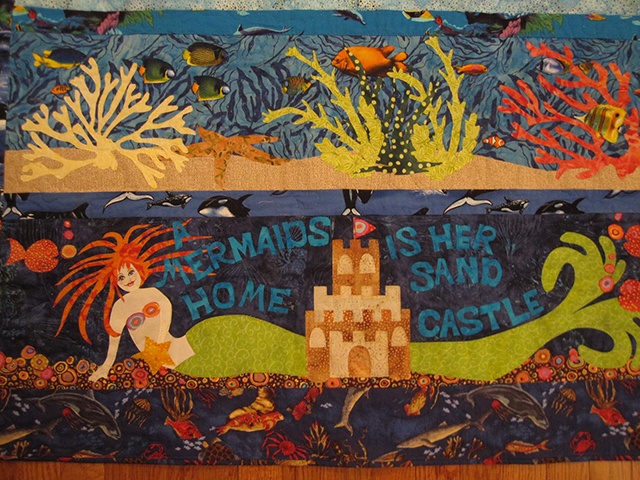 The mermaid on the bottom left side was fun to make and it came from Seattle Washington which my cousin Katie gave me who happens to live up there. The quilt store is 601 SE Pioneer Way Oak Harbor, Washington, The phone number is (360) 675-7216. I couched down the fibers that make the seaweed in the quilting process. I must mention that all of the fiber came with the kit. Cousin Mary had all kinds of beads and other very unique embellishments from her doll making. I added shells to make her more family friendly. In this kit only the strips were cut for me making the row even more mine with how I would like it to look. Not all stores decide to have license plates and this is one of them.

The one with the dolphins jumping over the waves is from Cottonseed Glory in Annapolis, Maryland . This 2015 row has a fun story that goes with it. I went to Maryland before a family reunion in Rhode Island that summer and brought some of the Row I had put together before hand. Of course I bought fabric in the stores I found up there plus some more rows. I rolled up this row so you could only see the sky fabric. I could not find it anywhere I looked even after I was home and taking all of the fabric apart to look at it. I thought it was just sky fabric folded up, it wasn’t until the spring of 2016 that I found it rolled up in other fabric! I had to cut all of it out with scissors using their pattern.

The four fish in a row are from New Moon Textiles 2015 offering and it closed in the summer of 2016. Bobbie has a new online store and quilting studio. Make an appointment to see what she has now. These fish are all paper pieced and the paper pieced pattern came ready to make up.

Many years ago we had an aquarium with fresh water fish in it and the 2015 Delaware row reminds me of it. Go to http://www.delawaresewing.com to see what the Delaware Sewing Center has to offer. They have two stores and I visited the one in Dover. I cut all of the parts of this under the sea one piece at a time. I than fussy cut each fish from the fabric they provided in the kit.

The mermaid on the bottom came from a 2016 California Roxanne’s A Wish and A Dream in Carpentaria. The wonderful ladies laser cut all of the main parts which is a hallelujah for me, I didn’t have to cut all of those letters and small parts that are part of it.  I go to this quilt shop often even though I don’t live close by it is a fun place to find colorful fabrics. What made the finishing touch for this one is Mary putting a face on her and she did a wonderful job. 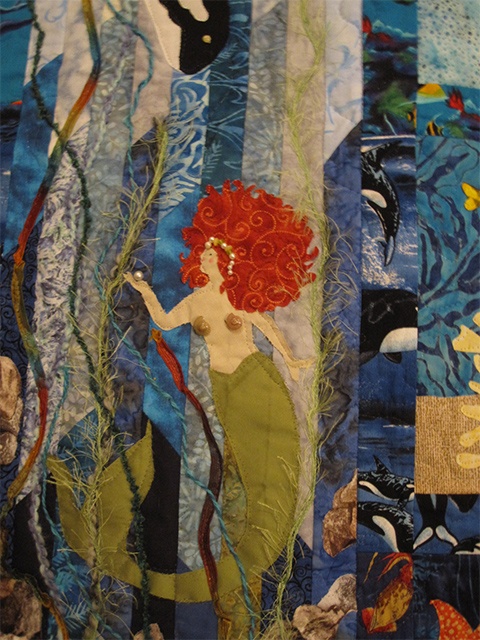 Using fabrics that I thought went well with the theme of this quilt finished it off. I bought many of these fabrics in 2015 going to stores close to the ocean to find them. When I make quilts for people I now make a pillow case that will go along with it like this one with mermaids and anchors to go with a water them. 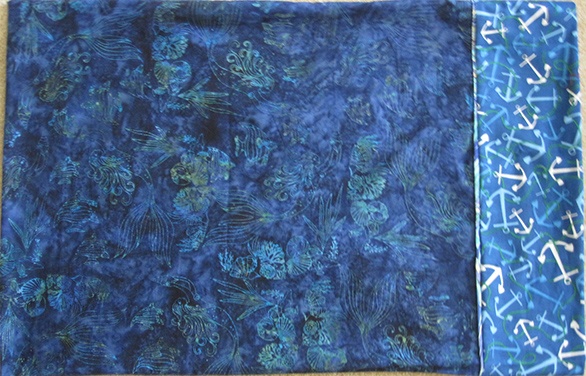 I gave my other two children and their families quilt tops that have to be quilted. The theme for the Row by Row 2015 was water and 2016 was home. All of the stores had different ideas for the theme each year. Keep coming back to my blog to see what other quilts I made with more rows. 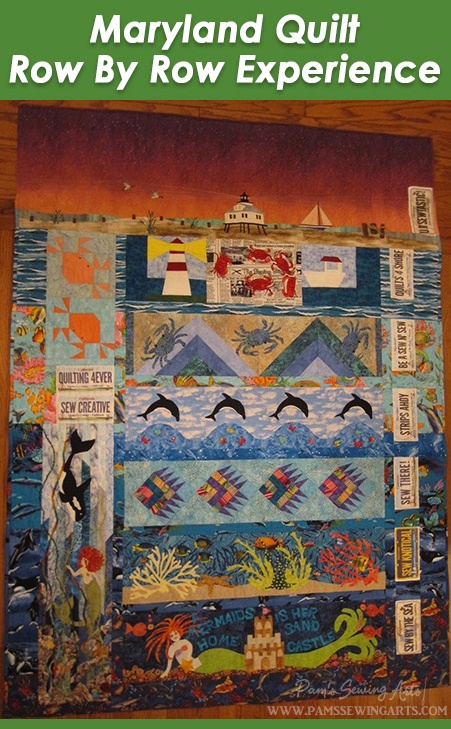