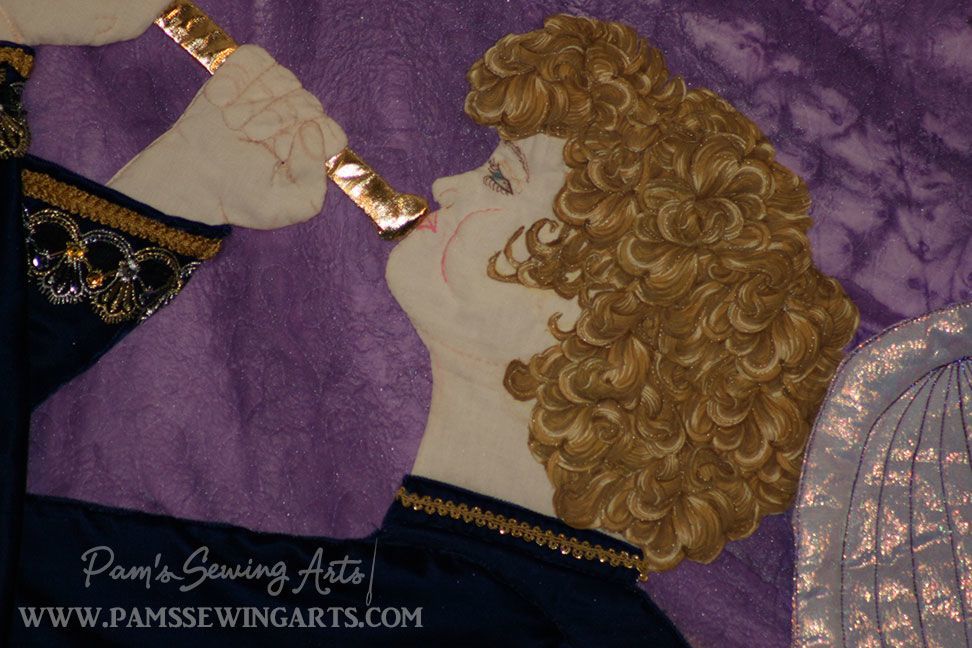 This banner is approx. 5’ X 9’ with a hand painted purple background. I took a picture of my nephew Tad who has very curly hair to get the idea of where everything went and I used his face for the angel. The wings was made separately and machine sewn to make the highlights and feathers. The outfit is made of velvet with a fancy lace edge. The trumpet is a gold lame’ fabric hand appliqued down. I used fabric makers to make the face and hands and hand appliqued them down. The angel hair is a fussy cut fabric that has curly ques on it and I put them down carefully in the place I wanted them and sewed them down by machine. The die cut letters are from the same lame’ fabric the trumpet with a heat bonding material attached and machine quilted down.

Angel: The English word comes from the Greek “angelos” (messenger). In the Bible they were described as an intelligent and immortal species, usually presented as being visually indistinguishable from humans — i.e. with a human body and without wings. They delivered messages from God, and either harmed or helped humans. Satan is described in the Bible as an evil angel. Because the Bible’s cosmology asserts that the earth was flat, that it was covered by a metal firmament or dome, and that God resided in Heaven above the dome, angels have often been portrayed as having wings so that they could fly from Heaven to earth and back.

Holly: Holly, the symbol of Christmas, represents immortality. The reference finds its origins in the legend which suggests that when the Holy Family was fleeing Herod’s soldiers, they took refuge beneath a holly tree that concealed them. It is said that Mary blessed the tree and declared that it would be forever green. Another legend says that the Cross was made of holly wood. There are many legends that go with holly this is just one of many.

Daystar: What is commonly called the daystar is a reference to the Advent of Christ the Messiah. In Advent Symbolism, the star represents divine guidance and favor, as suggested by the account of the Magi, who followed the star to the infant Jesus. The star is one of the less common symbols of Christ (“A star shall come out of Jacob”); “I am……. the bright morning star. Rev. 22:16.

Pentacle/Pentagram: The pentacle or pentagram is a five-pointed star that in Christian iconography is associated with the five wounds of Christ. It is also associated with the epiphany, representing Christ manifestation to the Gentiles. As a sign to ward off evil spirits, the pentacle is carved on door frames, thresholds, and gates.

Diamond: The diamond is associated with permanence and incorruptibility; in early Christian texts it symbolizes Christ. It also symbolizes the sun and light.

Trumpet: The trumpet is used symbolically as a signal of alarm or triumph. This may be the source of the use of trumpet as a verb, meaning “to spread good news.” Christian depictions of the Last Judgment show angels blowing trumpets to announce the end of the world.

Blue: The color blue represents many things: heaven, infinity, spiritual love, truth, constancy, and fidelity. The Virgin Mary is often depicted wearing a blue robe, although the liturgical color was fixed as white in the sixteenth century. Cerulean blue, the color of the sky on a sunny day, has a natural symbolic connection to Heaven. I picked Royal Blue for my angel.

Purple/Violet: These are liturgical colors that represent sorrow and penitence. Purple is used for the penitential seasons of Advent and Lent, although rose may be used on the third Sunday of Advent, and the fourth Sunday in Lent. In religious paintings, Mary Magdalene usually wears violet as a sign of penitence. In depictions of the Crucifixion, the Virgin Mary wears a violet robe as a sign of sorrow. In Scripture, purple is also in indication of costly quality and is frequently associated with royalty and high officials.

Advent: Advent begins the Christian year. It is the season of looking forward. Christians prepare for Christ’s birth at Christmas; we watch expectantly for his second coming. We anticipate the joy of his first coming, but also the judgment of his second coming. So we look forward in both happiness and penitential preparation. This period begins four Sundays before Christmas Day.